Too Loose or Too Tight? What is Going On With Your Pelvic Floor? 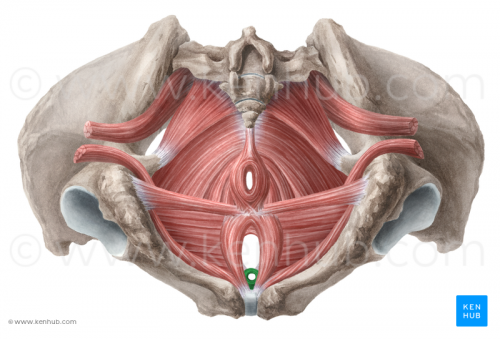 10 Sep Too Loose or Too Tight? What is Going On With Your Pelvic Floor?

In class, when I start to describe the pelvic floor, I often refer to the movements of a jelly fish.  Take a moment and think about the natural undulation of a jelly fish.  They contract upwards and then freely release and spread downwards.  That is how we want the pelvic floor to work.  I also refer to this area as the “pelvic diaphragm.” This area forms a diamond shape made of the space between the tailbone, pubic bones, and the two ischial tuberosities a.k.a. the sits bones.  The movements of the pelvic diaphragm mirrors that of the respiratory diaphragm.  When one inhales the diaphragm drops, stretches and expands, as the lungs fill with air and lift and contract with the exhalations as the lungs empty. (See the jellyfish relationship?) I think this terminology can also help explain that when we are “training” the pelvic floor, the engagement of muscles is done on the exhalation and the release is done in the inhalation.

There is a huge misconception that all pregnant people have weak pelvic floors and their main focus should be to tone.  We have all seen overly toned weight lifters with the incredibly strong arms and shoulders, yet they cannot lift their arms over their head easily because their muscles are so tight, they lose most of their flexibility.  Well, we do not want that same thing to happen to the pelvic floor.  A hypertonic pelvic floor loses its ability to release and can spasm.  A healthy pelvic floor needs to be springy, trampoline-like and able to lengthen and stretch to allow for the baby to come through, as well as facilitate internal rotation for delivery.

So how would you know if your pelvic floor is too tight or too loose or perfectly in balance?  One way is to go to a physical therapist who specializes in pelvic floor issues. They cannot only assess the situation, but give you exercises tailored to what you need, as well as do manual release of the muscles if they are too tight.  Sometimes the pelvis has an imbalance because of trauma, previous injury or even just habitual tendencies.  Just as some people have conditioned themselves to walk around with their abdominal muscles engaged or have shoulders that are chronically tight and lifted, the same thing can be the case for the pelvic floor.  A trained physical therapist can also look at your whole body and habits to help identify where the imbalance initiates from.

Another way to assess the pelvis is through the different exercises we practice in yoga class that highlight where the imbalance lies.  If we are focusing on slowly engaging the pelvic floor and holding it for 3 counts and you cannot maintain the tone for that long, you may need to focus on strengthening.  However, if when we are doing quick “blinks” of the muscles you are unable to have that quick release reaction or if you cannot do a slow 3 count release, you may need to focus on lengthening and relaxing the pelvic floor.

A Few Ways to Release the Pelvic Floor

In class, we intermingle a lot of poses that can help release and spread the sits bones, which can help gently stretch the pelvic floor.  For example, in downward dog- we always teach to bend the knees, lift the tailbone and spread the sits bones, and for those who can maintain that lift, to straighten the legs, otherwise, keep the soft bend in the knees.  A few other examples we do are “rocking squats”, in which we are squatting and rocking from one side to another, psoas releasing poses and restorative poses.

How the Pelvic Floor May Effect Birth

The pelvic floor needs to open and be aligned to allow the baby through the birth canal and out the vagina. Given that I do not believe many people are taking the time to examine the state of their pelvic floor (I was guilty of such thing with my first baby!), I wonder if there is a correlation between pelvic floor dysfunction and failure to progress in the second stage of labor (the pushing stage).  If the pelvic floor is hypertonic and cannot stretch or is asymmetrically tight (one side tight), could this keep the baby malpositioned or even prevent the baby from stretching through the birth canal? Could this be yet another reason for such a high national cesarean rate?  This is just my speculation, but I believe good food for thought.  It may be worth taking some time to explore: is your pelvic floor too tight, too loose or, just right?