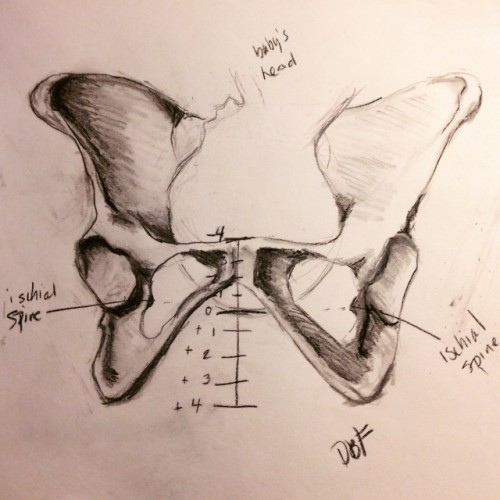 Watch most movies or TV shows that show a hospital setting where a woman is giving birth and comments like “how dilated is she?” or “Oh, you are 10 cm, let’s start pushing!” are being thrown around. So it is no wonder that many people associate labor progress with one determining factor- cervical dilation.  However, there is another key element to help decide when to start the actual birthing of the baby- station!

What is station and how does it pertain to birth, you may be asking yourself.  Station is the baby’s presenting part- most likely the head- in relation to the ischial spines of the mother’s pelvis. The ischial spines are little bony protruberances felt along the ischium, the lower and back part of the pelvis.  During a vaginal exam, these landmarks are used to help measure the baby’s decent during labor.  (Please do not go fishing up in your vagina to determine the baby’s decent).  If the head has not descended into the pelvis, it is measured in centimeters as a negative station from -4 to -1. Once the head is inline with the ischial spines, it is considered a zero station.  As the head continues it’s way downward, we switch to a positive measurement, +1 to +4 until the head is crowning. 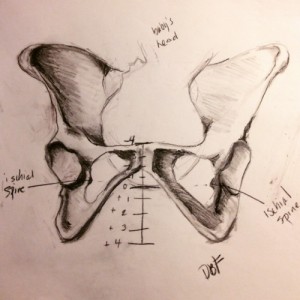 The determination of station can be a crucial part to determining when the mama should move into the second stage of labor, the pushing phase.  Some women are going to have an uncontrollable urge to push, my friend explained it to me like she was “vomiting out of her vagina” (nice imagery!).  Her body could not resist pushing.  This physiological response is actually called the Ferguson reflex.  Renowned French obstetrician Michel Odent calls it the “fetal ejection reflex”.   This occurrence is more often seen with an unmedicated birth where the strong rhythmic contractions pushing the baby down onto the Ferguson Plexus of nerves, causing the uncontrollable urge to push.  Medicated births will not have this same response since the medication inhibits the mother to recognize these signals.

Knowing that medicated births will not experience the urge to push, it is even more important to take into consideration the baby’s station.  In most hospital settings, once a mother starts to push, she is “on the clock.”  Meaning, most hospitals will have a predetermined amount of time a mother is allowed to push before declaring “baby is too big” or “failure to progress” and moving to a cesarean for means of birth.  To help keep the mother off the clock, it is recommended for her to “labor down”.  With a medicated birth, the mother is not feeling the sensations of the contractions, she will likely just feel the pressure of the baby descending, but her uterus is still hard at work.   “Laboring down” refers to letting the powerful uterine  contractions continue to push the baby further down into the birth canal, achieving a lower station and before initiating pushing.  This not only eliminates burning through precious time but doesn’t waste the mother’s energy of pushing.

Now you have another important piece of information that can help save the mama energy and possibly facing a surgical birth.  Don’t get caught up in just dilation, look at the whole picture to help determine when to move into second stage.   Knowledge is power!  Happy birthing!