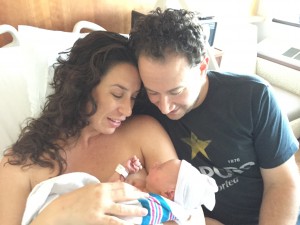 My birthing story begins with my husband… I mean where else can it really begin? When I became pregnant, I was super excited, but feeling a little alone in the process. Many of my friends were on their second or third children and I was pregnant for the first time… So my husband did some research and found The Prenatal Yoga Center. The Prenatal Yoga Center became our go to for everything and we are so happy we found it! I have been a yogi for over 10 years and believed in the strength of my body and being pregnant and having a baby is a natural process. I started taking pre-natal yoga classes and was a regular with Caprice… As I learned more and more, I realized that we wanted a doula- so I naturally asked her. Caprice was already busy at the time of my due date, but she referred me to the Childbirth Class with Terry Richmond! Boy, did I not know what a gift she was giving me!

During the break on the first day of class, my husband and I looked at each other, and both agreed that we wanted Terry there with us when our baby was born. As older first time parents, we recognized how much could go wrong and how little we knew. Many of my friends and relatives ended up having C-sections and inductions when they did not want them (resulting in healthy babies- and really that is what mattered), but I knew that I did not want that to be my story. I had always imagined a vaginal birth and as natural as possible- while in a hospital setting. We loved our OB practice (OBGYN Westside), but wanted someone there with us who was looking after us and helping me through the labor and preparation as well as the delivery. Terry was our gal!

Looking back I cannot imagine the process without Terry and the support from many teachers and women at The Prenatal Yoga Center. So, here is how it went.

On my due date a Tuesday, my husband and I went to see our OB and I was not dilated yet, I was told that we would schedule an induction 10 days past my due date, but could very possibly go into labor naturally before then. Every step of the way even before my due date I was talking with Terry about what was happening, how I was feeling, what the doctor saw, etc. So of course I told her this as well. I decided that I would go to yoga that day- of course- since the baby was not coming out… so I, like many other mom’s to be, practiced yoga on my due date. From there, I decided to contact an acupuncturist and schedule a massage- recommendation from a yoga teacher and Terry.

That Friday, my husband and I went to the acupuncturist and it was a relaxing experience for me (it was my first time with acupuncture- but I trust that process in general). That night I went home and all was normal. Then Saturday I got a massage- with a focus on pressure points to help the baby come down and go into labor naturally, I came home that night and felt good. Sunday, I went for a long walk with my husband and parents- as recommended by everyone… walking may help! So, Sunday night, watching the Mets lose the World Series, I started to feel contractions! I told my husband, we got excited, I called Terry, and she said she would come over whenever I wanted, but to try and sleep. So that night, I tried to sleep, between the bed and the couch and the contractions that were 10-15 minutes apart, I rested. The morning came and it continued. I told my husband to continue with his work as need be, and I relaxed and got my nails done (yes, I had to stand up every 10 minutes for the contractions, but it was all good). From there, things progressed on and Monday evening we saw the OB again. I told her where we were, she said I was dilated about 1 cm and the head was down- I asked what to do, and she said it could continue on like this for some time. I asked if she could sweep my membranes (something I had heard could help) and she said yes. She said she would do the same thing if she were I. So she went in and helped the process to further along- I left the office 3-4 cm dilated. My husband was nervous and so was I- we would most likely be parents within the next day or two now!

So that night, we returned home and tried to act normal- and watched a movie. During the movie, the real contractions began. So, we called Terry and made a plan to reach out again when we were ready for her to come over. I wanted to experience labor with my husband alone for a bit and try and sleep if we could. So between10pm and 1am, I breathed and my husband supported me… then Terry came and we called the OB, so they knew a baby was coming soon. Terry was amazing! She helped me verbalize my pain in a more effective way (low groans instead of high pitched cursing), she positioned me so I felt less pain, she massaged me, she breathed with me… and she let my husband sleep for a few hours. As the labor continued, I realized most of the pain was in my back and felt that we were not progressing much- contractions were still about 5 minutes apart. I started talking with Terry about an epidural, told her I was considering it, since I thought it would be a long haul and I felt the pain I wanted to feel… and then I threw up. Now, thanks to Terry, I knew that this may happen- so I had only had chicken soup for dinner… I threw up a lot, with my husband and Terry on my sides, holding a bag (which I missed of course), so I realized that I would need an IV. I decided, when we got the hospital, since I would need an IV, which would confine me to the bed, that I would get an epidural too. While still at home, I showered- while laboring-which felt really good. My husband called the OB, and Terry knew what to say to get me in and straight to a room… and we were off!

My husband ordered an uber (it was around 4:30am) and we went to the hospital. Once we arrived, we got to go straight to a birthing room at Mt. Sinai and shared what we needed… and it was all taken care of. It was so wonderful! Once I started on the epidural, the doctor broke my water, I started on Pitocin and I was all situated, my husband played DJ and put on some great tunes. Whenever there was a tough moment he would share fun memories and stories with me and distract me. All the while, Terry worked with the nurse and doctors to get me positioned better, help get the baby’s head in a better position and by 8 am, we were ready to call our parents and let them know they would be grandparents that day! My husband and I became so excited that we would become parents that day!

I was always concerned that the epidural would not allow me to feel anything, I was happily wrong. I was able to feel pressure when contractions came, but the deep pain I was feeling at home was no longer. We continued down this path, and then I realized I was starting to feel lots of pressure in the front at around 1pm, like my baby girl was almost ready to come out. Terry called the nurse and doctor, the doctor checked- and she said, “She is coming soon!” I was asked to push once, and then told, “Oh, sh*t she is coming now!” We watched our doctor prepare and get all dressed for delivery, and she told me to push, but not too hard (so as not to tear). I pushed- Elton John’s “Tiny Dancer” was playing, my husband was holding my head, Terry was on the other side of my head, and 8 minutes later the OB pulled out our healthy little girl who cried – with her umbilical chord loosely around her neck and feet.

We asked that the baby not be cleaned and to keep the umbilical chord attached longer, and we let our baby girl, lay on my chest and find my breast. It was the most amazing thing to see and feel! My husband got teary eyed and I could not stop smiling.  I am happy to say we got everything we wished for and more. We felt blessed to have Terry coach us along the way, our great OB, and a wonderful Mt. Sinai nurse- but most of all, we had our healthy baby girl, Ariana Kaia!