Postnatal Yoga and The Power Pose

I recently watched a very interesting TED talk lead by Amy Cuddy, social psychologist. Her talk was titled “Your body language shapes who you are.” Throughout it she highlighted that our body language does not just influence how others read us, but points out that we are also influenced by our own “non-verbal” body language.

I found this topic fascinating. For the past 11 years, I have been working with new and expectant mothers. While there is an obvious huge physical shift to the pregnant body because of the anatomical changes of growing a child, the enormous physical alterations in the postpartum body due to emotional changes and new physical habits that come along with motherhood are often overlooked.

From my observations and my own experience, a new mother is often tired and usually overwhelmed at some point by this major life change and responsibility. The mother is also changing her physical habits: she is likely holding, wearing, strolling, or feeding her child. Her new habitual positions may have her looking down at her baby, and the physical and emotional fatigue can lead the mother’s posture to change. For example, her chest may appear sunken-in. The mother is likely not paying attention to her posture since her focus is now on her baby. 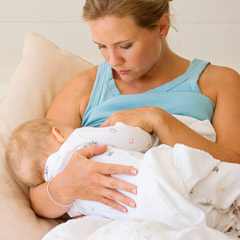 Ms. Cuddy notes in her presentation that the positions we place our body in has a direct effect on our hormone and stress levels. What happens when someone takes on a “power pose” – a pose in which they take up space and stand firmly. The images she used where hands behind the head or the “wonder woman” stance. Feet wide and hands firmly on the hips. 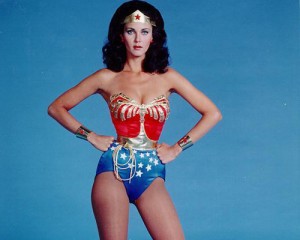 People in these positions often feel more confident and happy. There stress level is lowered and their testosterone (the “power” hormone) level goes up. When someone assumes a small position, shoulders rounding forward, sitting curled up, and shutting down, this can lead to a lowering of testosterone and a spike in cortisol, meaning they feel more stressed and depressed. So if we make ourselves small and collapsed, it leads us to thinking of ourselves in that manner.

In terms of a new mother, we often joke in class that this is the “mommy body.” Now, we can see the harm in letting ourselves take on this physical habit. It can influence how a woman sees herself and possibly lead to feeling small, isolated or depressed.

So what can we do to change this? Ms. Cuddy suggests, “Fake it until you become it!” Change your body language. She says, “If you take a power position, even if you don’t feel like it, the result is you will actually take on the real feeling.” She goes on to explain, “Our bodies change our minds. Our minds change our behavior and our behavior changes our outcome.”

What does this have to do with postnatal yoga, you might be asking? Our classes are made up of asanas, “poses.” Each asana has an innate “bhavana” or feeling. For example, one is likely to feel more powerful and present in a Warrior pose then they would in a seated forward bend. In postnatal yoga class, we start every class with a restorative chest opening. We are trying to counter the new habit of the “mommy body.” Chest opening poses are naturally “bigger” poses since you can’t really hide and retreat in them. Also, since the chest is in an expanded shape, this leads to fuller breathing which can lead to a calmer feeling.

Our postnatal class starts with several sun salutation and standing poses. These types of poses heat up the body and get the blood moving. It is much harder to remain sluggish or sad when in motion! Again, the nature or bhavana of standing poses is to feel grounded, confident and expansive. Through the yoga practice, we are trying to influence the body to change its habits – open the chest, take up space, become “big” and “powerful.” The hope is the mother can take on some of these postural traits and leave class feeling grounded, energized and balanced.

Being a new mother is very challenging for most. It is good to know that a little yoga can create big change and help ease the way into this new journey.

Watch the TED talk yourself! It is great!!
http://www.ted.com/talks/amy_cuddy_your_body_language_shapes_who_you_are.html