Here’s Your Baby With A Side Of Placenta

18 Dec Here’s Your Baby With A Side Of Placenta

The last couple of days I have been talking to my classes about the placenta encapsulation blog I have been working on. So far I have been getting quite the wide range of responses on the subject! Some women are fascinated to hear about the benefits of placenta encapsulation, others had never heard of the idea and some seem shocked and a little taken aback by it. I don’t blame them in the least bit for their reactions. The idea of consuming one’s placenta is not often discussed today as an option at all- nothing like, for example, who will cut the umbilical cord. Even that makes some people squeamish!

Even though ingesting one’s placenta is not common practice (although New York Magazine featured an article on placenta encapsulation a couple of years ago. So maybe it is getting a little more mainstream !), it is still a birth option that some may be interested in choosing. So…let’s discuss!

What is it placentophagy?
Placentophagy is the act of mammals eating the placenta of their young after childbirth (1). There are various ways to consume the afterbirth, the most common method is called Placenta Encapsulation. This is a process in which the placenta is dehydrated, pulverized and then put into capsules, or Homeopathic Placenta Tincture. It can be done by a layman or a Placenta Healing Arts professional can come in and prepare it for you.

Since this practice is not widespread in the United States, it is often met with great criticism and skepticism. There are various studies that support the theories behind placenta consumption. However, from my research thus far none have provided definitive conclusions. 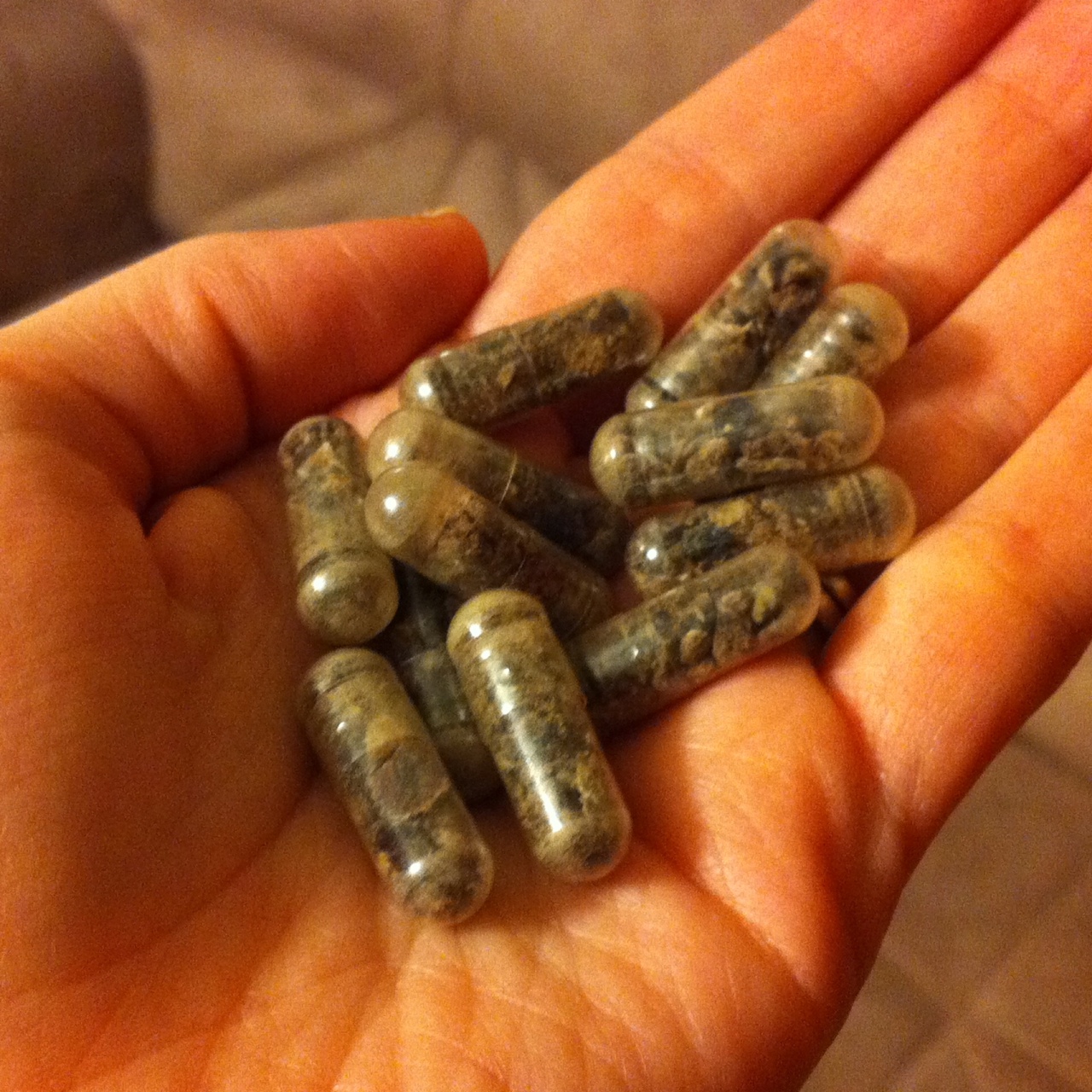 Helps Prevent Postpartum Depression
One of the main theories for placentophagy is it helps ward off postpartum depression. There are a few ideas about how this works. One is, the placenta is chock full of nutrients and is especially rich in iron. It is rather common for a women to suffer from anemia postpartum. The study “Maternal Iron Deficiency Anemia Affects Postpartum Emotions and Cognition,” conducted in Africa and led by Dr. John Beard, takes a look at the correlation between the postpartum mother’s iron level and her emotional state postpartum. The study concludes that there is a strong association of iron status with depression, stress, and cognitive functioning in African mothers during the postpartum period (2).

If we are sticking with the theory of how nutritious the placenta is, then it is logical to agree that the nutrients from the placenta can help replenish and recharge an exhausted new mother. If she is anemic, she is feeling even more tired! A 2002 study in the Journal of Obstetric, Gynecologic, & Neonatal Nursing states that “fatigue as early as 7 days postpartum is predictive of depression at Day 28 postpartum” (3). If the iron-rich nutrients from the placenta can help stave off fatigue, the mother is less likely to experience postpartum depression.

There is also much data that explains how perceived stress postpartum can lead to postpartum depression. There is the belief that during the final trimester of pregnancy the placenta secretes a high level of CRH (corticotropin-releasing hormone) to help the mother manage the stress of impending labor. Once the baby is born and the placenta is gone, these CRH levels plummet rapidly. In the article “Baby Blues – Postpartum Depression Attributed to Low Levels of Corticotropin-releasing Hormone After Placenta Is Gone,” Dr George Chrousos, endocrinologist, explains his belief that CRH levels are temporarily low in new mothers because CRH from the placenta disrupts the feedback system that regulates normal production of the hormone. During pregnancy, when CRH levels are high in the bloodstream, the hypothalamus releases less CRH. After birth, however, when this supplementary source of CRH is gone, it takes a while for the hypothalamus to get the body’s signal that it needs to start producing more CRH (4). It is believed that ingesting the placenta will help to balance out the dramatic shift of hormones experienced postpartum. This hormonal balance can help the mother manage stress, reducing the chances of postpartum depression.

Boosts milk supply!
There is also claim that eating dried placenta or encapsulated placenta can have an effect of milk production. A well know study, “Placenta as Lactagagon,” led by Soykova-Pachnerova E, et al in 1954, examined the relationship of consuming dried placenta with the possible increase in a mother’s milk supply. While the study is inconclusive in explaining how exactly the placenta increases supply, it does conclude that out of the 210 participants, 181 (86.2%) reacted positively to the treatment (5).

Placenta Enthusiasts also stand behind the idea that most mammals innately know to consume their afterbirth to help them heal from the stress of labor and move easefully into motherhood. This argument suggests that these benefits can be equally supportive for us human mammals as well. For thousands of years, the Chinese have revered this powerful substance in their Materia Medica as regenerative to the essence and the breath. Full of Qi (life force), the placenta aids in the recovery from childbirth, restoring lost hormones, augmenting lactation, shortening bleeding time, preventing mood jags, and ultimately helping your child in this vital time of bonding and nurturing (6).

In addition to the ideas listed above, the placenta consuming supports also believe placentophagy can:

I would like to share an interesting finding from a Traditional Chinese Medicine practitioner who offers contraindications of using the placenta medicinally after birth. “Placenta should not be taken alone if there is heat from yin deficiency. This would be characterized as flushed cheeks, hot palms and feet, afternoon fever, nightsweats (yes, these are common menopausal symptoms- many of which are caused by yin deficiency). In TCM many acute illnesses, especially those characterized by fever, chills, aches and sneezing, are seen as the invasion of a pathogenic evil, placenta should NEVER be taken with these symptoms. Placenta is a powerful tonifier and cannot differentiate between the body’s defensive qi and the invading pathogen. Taking it while fighting off, say, a common cold, or more to the point, a breast infection (whose sx are fever, aches, chills, etc.) can make the pathogen stronger and go deeper. This is the same reason ginseng, a tonifier, is not to be taken with a common cold. Watch those ladies right now who get influenza after delivery- they should avoid any tonifiers (placenta or otherwise) as well” (7).

How to get your placenta home?
After reading about the theoretical benefits of placentophagy, perhaps you are now on board with it. But if you are giving birth in a hospital you may run into to roadblocks in actually keeping your placenta. Some hospitals send the placenta to the morgue, others bring it to pathology for further examination after birth, and some dispose of it deeming it is biomedical waste as it may risk transmitting a disease to the public.

However, New York state law allows hospitals to release healthy placentas. Some hospitals require patients to sign waivers; others readily release placentas. Others don’t have any protocols at all, leading to a range of practices that depends on which doctor or nurse is on staff that day (8). If you are interested in taking your placenta home with you, it is best to look into the practices of your hospital ahead of time so there are no surprises afterwards.

Personal Experience- yes, I did it!
Even though I am presenting this information in the theoretical perspective, since there has not been any hard and fast conclusions, I personal subscribe to these ideas and do believe in the benefits. I had the placenta from my son’s birth encapsulated and took the pills for several weeks following his birth. I cannot compare two separate situations since I have only given birth once, but I can say that my postpartum period was devoid of the “baby blues” and that my energy level was actually pretty good considering how sleep deprived I was. I was producing more milk than I knew what to do with- during that time, I could have been a wet nurse! I literally had boxes of milk storage in my freezer! The only down side I experienced was, I started to smell a bit metallic, and I am assuming that is from the high level of iron in the pills. For baby number two, I am absolutely planning on encapsulating the placenta again.

So there you have it! Lots of ideas behind placentophagy. For some people this is really going to speak to them; for others, maybe not so much. Again, it is just another option to think about it as you make your way into motherhood.