Please note that this workshop is being offered ONLINE only.

Pregnancy and new motherhood are emotionally charged and transformative times in a woman’s life. Up to 80 percent of new mothers experience the baby blues which can leave a mom feeling overwhelmed, exhausted and weepy. These blues lift after the first week or two and many moms start to feel better as they settle into new motherhood. Yet one in five new moms develop stronger symptoms that can include postpartum depression, anxiety, OCD, rage and in severe cases – psychosis. These diagnosis are referred to as perinatal mood and anxiety disorders, or PMADs.

In this seminar, led by Paige Bellenbaum of the Motherhood Center, we will discuss the role and scope of how a practitioner such as a pre and post-natal yoga instructor can understand generally what PMADs are, how to recognize symptoms, sensitive ways of broaching the subject if you are concerned (especially since women underrepresent their true experience), trauma-informed care, care for partner/family, and an overview of basic clinical modalities (to understand how a client might be treated). 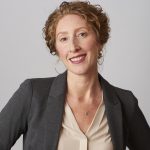 Paige Bellenbaum, LMSW, is the founding director and Chief External Relations Officer of the Motherhood Center in NYC.

Paige started her social work career working at a homeless shelter for families in San Francisco, where she built a multi-million Housing and Aftercare Program for families transitioning from homelessness to permanent housing. She then moved to New York City in 2000 to get her Masters of Social Work at Columbia University. After she graduated, she held executive-level positions at various non-profit agencies including the Center for Family Life located in Sunset Park Brooklyn, Habitat for Humanity – New York City, and Settlement Housing Fund. Throughout her non-profit career she has worked with homeless families, victims of domestic violence and child abuse, formerly homeless single mothers, formerly incarcerated young adults, and more. She Chaired the Youth and Human Services Committee of Community Board 6 in Brooklyn for 6 years, and ran for public office, and was elected in 2015 as the District Leader for the 52nd Assembly District in Brooklyn which she held for four years.

After her first child was born, Paige suffered from severe postpartum depression that nearly ended her life. Once she began to heal, she became committed to fighting for education, screening and treatment for postpartum depression so that no more women would have to suffer silently. She drafted legislation in New York State that was championed by State Senator Liz Krueger, mandating education and strongly encouraging screening of all new and expecting mothers that was signed into law in 2014. Paige has been an outspoken advocate on the issue of postpartum depression and uses her own story as a tool for change. She has appeared on the Today Show, NPR, PBS Newshour and in Women’s Health Magazine, The Wall Street Journal, and several other media outlets.

Give the gift of yoga or a workshop with a gift card!