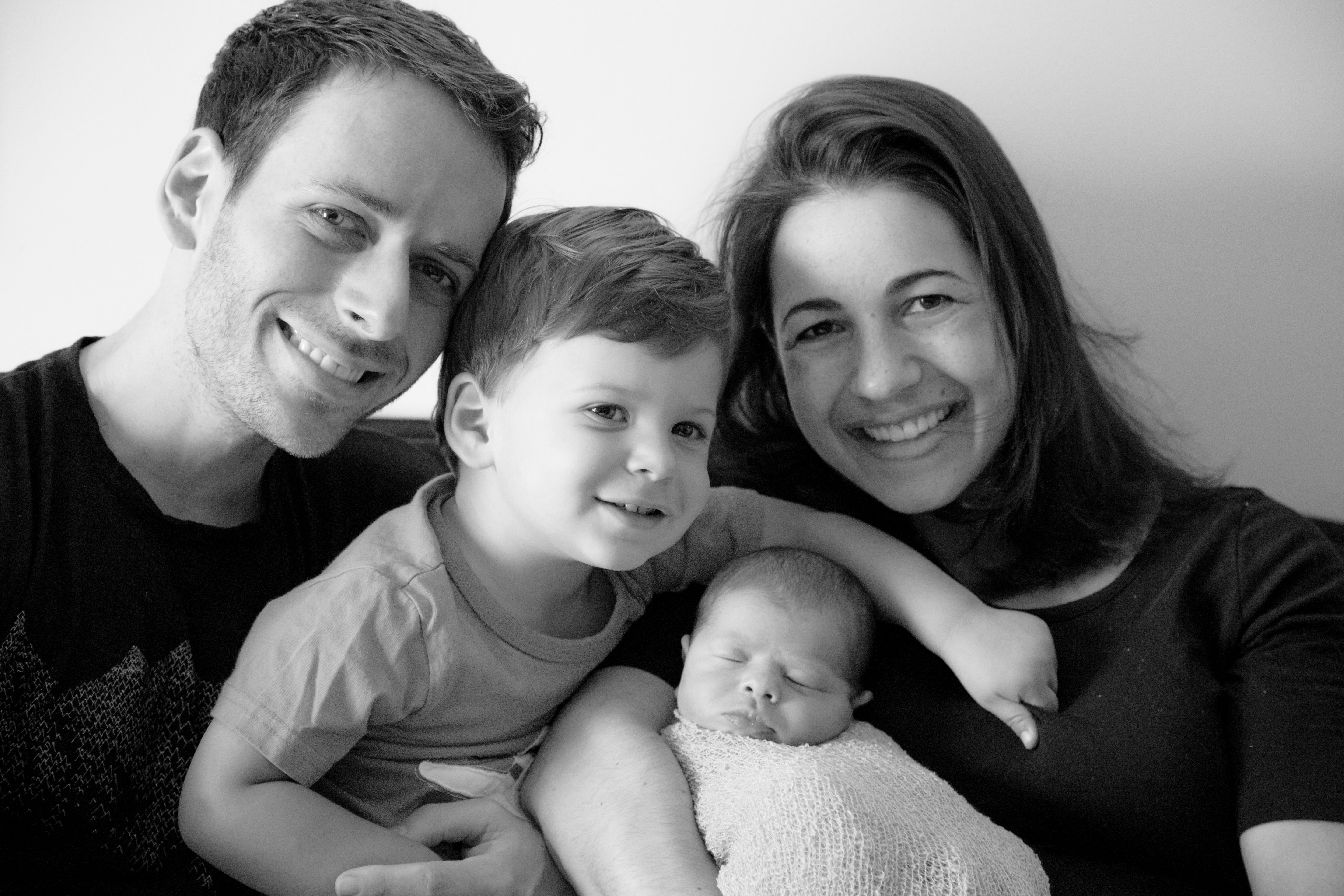 If you come to class regularly then you know that we talk a lot about accepting and embracing the unexpected when it comes to giving birth. Good thing Jenny Wood came to class a lot! Her daughter, Noa Violet, entered the world in dramatic fashion on July 9. “In about 90 seconds, I went from, “We have to go to the hospital now” to, “The baby is coming!”

The most unexpected thing my second baby, Noa Violet, brought me was her unexpected birth. We had prepared for a natural birth at Sinai West Birthing Center, but she had other plans. Noa made her dramatic entrance shortly after I woke up my husband, Jon, on Sunday, July 9, at 7:30 AM. In about 90 seconds, I went from, “We have to go to the hospital now” to, “The baby is coming!” Jon and my mom, Ricki, stepped in as a dynamic doula duo while they also managed my two-year-old son, Ari. 911 walked us through post-delivery, as we didn’t even have time to call them until she was already out. We arrived at the hospital — ambulance style — in good spirits, with a healthy baby, and with quite the story.

I have a very full-time job at Google in addition to being a mom. In a women’s leadership roundtable, I got solid advice from an executive and mentor, Julie, who said, “You can have it all…just not all at the same time.” That was empowering. I’ve had to let go of things I love in order to prioritize motherhood followed by my career. For example, I am a private pilot in my spare time, but since spare time doesn’t exist anymore, I’ve had to put flying on the back burner. I haven’t flown in over a year, and it makes me sad. However, Julie’s advice reminds me I can reprioritize this at a different stage in my life. This simply isn’t the time.

The most helpful thing a friend did was give me the advice to get out every day. With both kids, we had them in Central Park by day four and on the subway by two weeks. (Our pediatrician told us that most viruses are spread through touch, not air, so we figured as long as we kept them from licking the subway poles, we were good to go!) Getting out makes me feel more human and less tired. It’s been so much fun to explore the city while on maternity leave.

Noa and I bond when we’re nursing. It’s an opportunity to slow down from all the busy-ness and be present. Middle-of-the-night feedings get a bad rap, but I actually find those the most meaningful. The house is quiet, the city is still, and I take in Noa’s deliciousness while watching her chest gently rise and fall. The lost sleep is a bummer, but it has such good ROI. I also strive to bring this presence to daytime feedings. I try to set a timer for 10 minutes once a day to just breathe and meditate while nursing. No texting, photo mining, or creating to-do lists. It’s a work in progress, since the phone’s gravitational pull is legit. Some days, I’m successful; other days, the phone wins ?