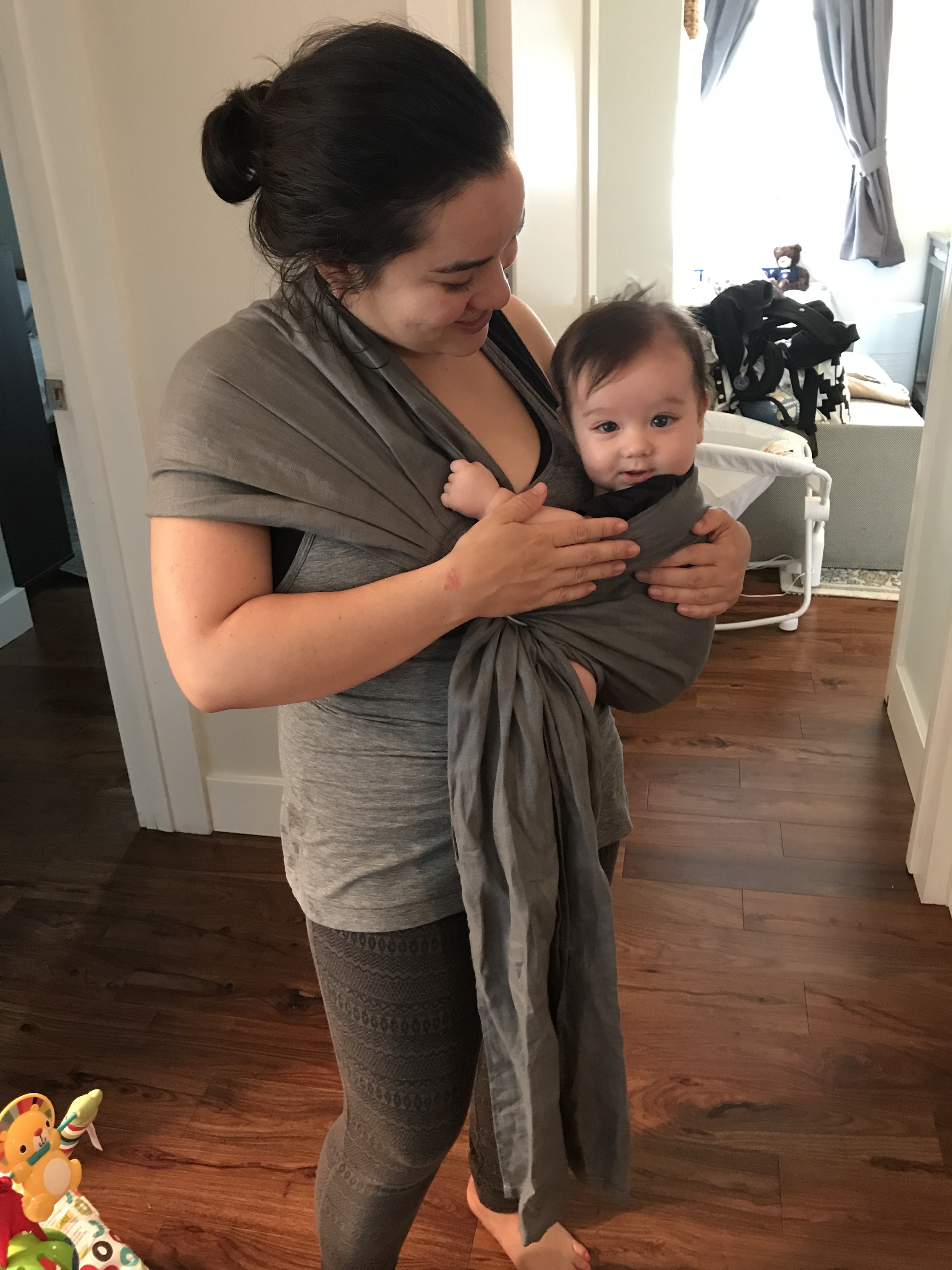 If you’ve met Corinne Low, you’d remember her. She’s got infectious energy, a wealth of sound advice, and an admirable dedication to breastfeeding, i.e. pumping while practicing yoga. She also has “a really interesting motherhood story because although Kai is my first baby, I’ve been a step-parent to Alex for 10 years. So, there are some things about mothering that I already know intimately, but then there are things that are completely new to me.”

I think what’s surprised me about parenting a newborn is both how hard it is (for the first few weeks, I couldn’t believe how much I’d underestimated the challenge!) and how impossibly delightful. From those first smiles, to breastfeeding, to squeezing his chubby legs, there are so many tiny, delicious little gifts all along the way to make up for those sleepless nights! But, because, as many families do, we faced difficulty with our older daughter in welcoming a new baby, by far the best moment for me has been seeing Alex hold Kai for the first time, and him giving her a big smile right on cue, and knowing everything was going to be okay.

I know I’m supposed to say, “Just enjoy every moment, because it goes too fast!” and that definitely needs to be said, too (seriously—you CANNOT take too many pictures or videos of the first few weeks), but I have practical advice. The most important thing I had to learn the hard way is that babies need to sleep every 90 minutes. Once I figured that out, I was so mad that no one told me earlier—I felt like I’d unlocked the “baby- cheat code.” Early on, Kai was so sleepy that he’d doze off nursing or in the carrier and get plenty of Z’s. But a few weeks in he started getting fussier and I’d be bouncing him trying to calm him or continuously sticking my boob in his mouth, and I didn’t realize that what he really needed was sleep, and he needed my help to get it. Once I started watching the clock and helping him sleep every 90 minutes, he became a completely different baby—so cheerful and calm, that everyone said how lucky we were to have such an easy baby. I wish my frazzled self had known this secret earlier, so I’ll try to save you from repeating the same mistake.

Another practical tip: Anyone who’s seen me at PYC knows I’m obsessed with the silicone milk catcher, instead of a traditional pump. It uses a passive vacuum to extract milk, and it’s so amazing because you can use it without electricity! I commute to Philadelphia for work, so I’ve even used it to pump on the train, in my seat under a big nursing scarf.

I’ll leave you with a more philosophical thought, which is that nothing in motherhood is permanent. That can be a good thing, because just when things seem impossible, they’ll change. But then, just when you get the hang of it, they’ll change again. So yes, savor every beautiful, ephemeral moment, but try to remember the seemingly impossible ones are temporary too.

I attended PYC almost every week during pregnancy and postpartum, so yoga has been absolutely crucial to me, both physically and mentally, through it all! I think the most helpful thing was the “yoga mindset” of honoring your body and what it needs, which was crucial for me during birth. I was dead set on a natural childbirth, and believed so strongly in my body’s ability to do it that I didn’t even research anything about epidurals or other interventions! Well, baby Kai had other plans. I had 36 hours of non-progressive labor, with my doula and me trying everything to work on the baby’s position so that he could descend and really get things going. Finally, I had to let go of the birth I wanted and accept the birth I needed—I had been up for two nights in a row, and I desperately needed rest. After I got an epidural and slept for a few hours, my doctor recommended positions I could try to turn the baby from face-up to face-down. I breathed through each contraction and spoke to the baby, asking him to turn. Once he did, labor moved super quickly, and with just ten minutes of pushing, my perfect, healthy baby boy was out, 50 hours after labor had started. I know that letting go of my plans in that moment is what allowed me to have a beautiful vaginal birth. I had to be flexible—not my best thing!—and respond to things as they were, not as I wished them to be.

I love family together time—I love watching Kai’s big sister entertain him, or seeing my husband read to him, and having dinner as a family, which we try to do every night. But my favorite way to bond with everyone is one-on-one. It’s so great for me to get non-baby time with Alex, whether it’s getting out of the house for a cup of tea or just detangling her long hair while we chat about the day. Over the summer, instead of putting Alex in camp every day, I got childcare for Kai instead and would use the time to do some fun things around the city with Alex. I divided my maternity leave between the two of them and had special time with both. And with Kai, I savor those moments when it’s just the two of us—to cuddle, play, nurse, whatever it might be. I feel like I really communicate with him in those moments when no one else is around. And the same applies to my husband. In the beginning I felt like with managing the needs of two kids, I had nothing left for him. We had to make everything very business-like to get everything done. But, when we’re able to find those few moments to check in about our day or watch 20 minutes of TV together, it’s so restorative for both of us. As Deb has said in class, that’s one of the best things about getting your baby to nap and go down for the night—you get time for yourself and for the rest of the family!