5 Ways I Have Remained (Somewhat) Sane As a Mother 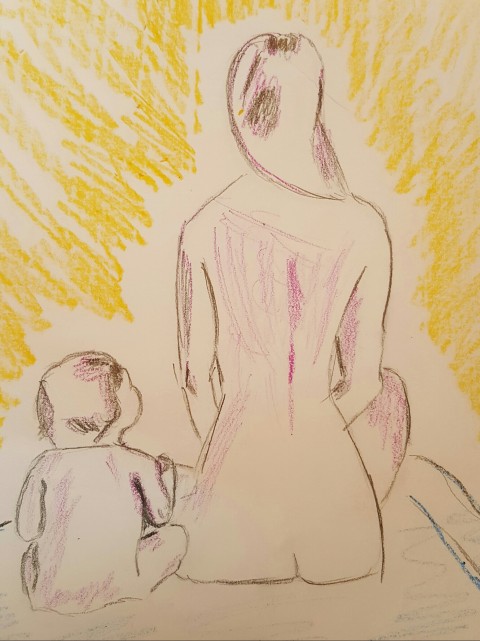 BY G. H.
I saw the photo this drawing is based on, taken by @daniloxton on Instagram, and aside from immediately wanting to create a drawing out of it, it also evoked so many feelings of early motherhood for me.
The way the two of them are sitting close, bare skin, reminds me of how when my own daughter, Elle, was a baby, I could literally feel like we were sometimes one body.  Her needs were my needs for sure.  And the slight lotus pose Dani is sitting in has me laughing a little, because I remember when I would occasionally try to meditate next to Elle and she would just look at me bug eyed.  The classic tension created from mama just needing a little breathing room for a moment.
Now that Elle is older, it has definitely become easier to find some “me” time.
Here are 5 ways I have remained (somewhat) sane:
1) I wake up half an hour before Elle does so I can have coffee in peace and meditate.  (You would think I would then go to bed half an hour earlier, but I do not.  Progress not perfection people).  I need half an hour because I spend at least 5 minutes in bed debating whether or not this whole “meditation” thing really helps me.  Then I replay the tape of what happens when I do not meditate.  Everything from checking my phone too much, to attempting to control the speed at which my husband makes French Toast happens.  It is not good.  I need to meditate.  I could not do this as easily when Elle was younger, because she a was a terrible sleeper, and thus I was, so meditation equaled sleep.  Now, this half an hour in the morning is a gift I offer myself each day.
2) My husband and I plan two meetings a week where we sit and talk about important stuff.  I know, this sounds really annoying and healthy, but it has really helped us stay on the same page with raising our daughter, and all the other adult-y things that come up.  In this way, I really feel like I have an ally when Elle is freaking out over her granola touching her yogurt, because we have already discussed how we can approach this together.  I did not know parenting would be so much about the drama of two different foods touching other.
3) I let Elle watch 22 minutes of “TV” at least 3 times a week.  (I put “TV” in quotes, because she actually watches a show on my laptop.  I have not turned on an actual TV in over a decade, and am not sure how it is done in this century really).   I have read all the articles about how watching shows is terrible for kids, but I’ve decided that since the show, “Stella and Sam”, is about a really cute brother and sister duo who do imaginative things outside, that the articles don’t count.  Also, since my husband works a lot of the evenings, I have to cook dinner, and my brain by six pm needs some space.  So, I cook in somewhat peace, while Elle giggles along with the siblings who have turned their backyard into Africa.  She also gets a cultural experience!
4) We have a babysitter for a couple of hours on Saturday.  This allows my husband and I some creative time.  I had a lot of guilt over this in the beginning, and literally had to write out the number of hours I spend in the week with Elle so I could see for myself that still, most of my free time is spent with her.  I am a naturally creative person.  If I am not creating something, I feel empty, and I am not my best self.  I started taking a watercolor/drawing class on Saturdays (which is where I worked on several versions of this picture), and I am a better mother because of it.  I come home from class feeling lighter, and inspired.  And one day, I will be able to show Elle some cool watercolor tricks.
5) See number one.